Erik Litzenberg is the Fire Chief for Santa Fe County, New Mexico. He started his career in public service as a firefighter with the Santa Fe County Fire Department. He has served in most positions in the City of Santa Fe Fire Department over the past 21 years, most recently for five years as the Fire Chief. He was asked to serve as the City Manager for the City of Santa Fe for the past year-and-one-half. As Fire Chief, Litzenberg promoted the development of a full time Wildland Urban Interface Division and the creation of a Mobile Integrated Health Office, which continues to serve some of the community's most complex and demanding patient populations. Through 24 years of service he has also worked for New Mexico State Forestry and as part of multiple Incident Management Teams, and for many years owned Santa Fe Wildfire, which provided resources for large scale incident management and response. Litzenberg holds a masters degree in public administration, and is currently working on a doctorate in sports administration. He is a graduate of the National Fire Academy Executive Fire Officer Program and the Center for Homeland Defense and Security Executive Leadership Program. Litzenberg represents local government as the Chair of the International Association of Fire Chiefs Wildland Fire Policy Committee, and is a member of the Wildland Fire Leadership Council. Chief Litzenberg has authored multiple articles and textbooks on fire service and organizational leadership, community risk reduction, and the Wildland urban interface. He enjoys training for and participating in triathlons, and lives in Santa Fe with his wife and children.

Assistant Chief Montoya began his career with Santa Fe County Fire Department by joining the Chimayo Volunteer Fire District in 1999. While volunteering, he found his passion in serving the community in both EMS and Fire and decided to pursue this full-time.  In 2000, he completed the EMT – Intermediate program.  While maintaining his service as a Volunteer Firefighter, Asst. Chief Montoya was hired on with Presbyterian Health Services. In 2002 he was hired as a full-time/career Firefighter for Santa Fe County.  Asst. Chief Montoya attended the first Paramedic Program offered by Santa Fe Community College in 2006 and soon after was promoted through the ranks as a Firefighter, Paramedic, Lieutenant, Battalion Chief and currently Assistant Fire Chief.  Asst. Chief Montoya continues to serve as a Paramedic with Presbyterian Health Services – EMS Division part-time to maintain and advance his skills in Paramedicine.  Over the past 18 years, he has also added to his experience by training in Rescue Operations, HazMat Operations, Pediatric and Advanced Cardiac Life Support, and various other courses.

Assistant Chief Black began his career in the fires service in 2003 as a volunteer for the Santa Fe County Fire Department. During his time as a volunteer, he served as the EMS Captain for the Agua Fria District and was hired to work as a regional staff member as needed in 2006. In 2011, Assistant Chief Black moved into a full time position with the department. He completed the paramedic program at Santa Fe Community College in 2013. He also earned his Bachelor's Degree in Business Administration from the University of New Mexico and his Associates in Paramedicine from Santa Fe Community College.

Assistant Chief Vigil is the Emergency Manager for the County of Santa Fe, New Mexico. He has over 35 years of public safety experience from being a Paramedic, Emergency Medical Services educator, Police Sergeant, and Fire Command Officer in both career and combination fire departments. Assistant Chief Vigil started his career at age 13 as a member of the New Mexico Wing of the Civil Air Patrol and was involved in air search and rescue. He soon became an Emergency Medical Technician and started teaching EMT courses at age 16. At age 19, he became the first Native American Paramedic in the state of New Mexico. In 1998, Assistant Chief Vigil left public safety to pursue a career in critical care nursing, eventually working at the University of New Mexico Hospital in the Cardiac Intensive Care Unit. He began to take a strong interest in infectious diseases and bioterrorism medical response. He holds significant certifications in the medical management of chemical, biological, radiological, nuclear, and explosive casualties.

Battalion Chief Karl Ehl has more than 17 years in the fire service. His service began as a Volunteer with the Bernalillo County Fire Department, District Seven in the early nineties. In 1995 BC Ehl moved the East Mountains and found a home with Moriarty Fire where he quickly moved through the ranks to the position of Chief Officer. In 2007, BC Ehl was hired with Santa Fe County Fire Department as the Fire Training Captain. He was promoted to the position of Battalion Chief in 2012. Over the years, BC Ehl has served on several committees including the Executive Board of the New Mexico Fire Chief’s Association, Middle Rio Grande Council of Governments, United Way Council, and the International Association of Fire Chief’s. He is currently licensed as an Emergency Medical Technician-Intermediate and is trained in Fire Suppression, Incident Command, Hazardous Materials response, Leadership and is an IFSAC Accredited Fire Instructor.

Battalion Chief Ruscetti has more than 20 years with the Santa Fe County Fire Department. BC Ruscetti joined the Edgewood Volunteer Fire District in 1988 and advanced in ranks to the position of District Captain. In 1995 he was hired as a full time fire fighter for Santa Fe County and spent the last five years serving as a Shift Lieutenant and was recently promoted to the position of Battalion Chief. BC Ruscetti spent several years as an adjunct EMT-I/C for UNM, ENMU and SFCC teaching EMT’s throughout New Mexico. He is also trained in Incident Command, Hazmat, tech rescue, swift water rescue and wild land fire fighting.

Battalion Chief Carroll began his career with Santa Fe County Fire Department as a volunteer with the Madrid Volunteer Fire District, after relocating to NM from Wisconsin in 2005. During this time, he discovered that he enjoyed the challenges and sense of accomplishment that came with being part of the Fire Department and its role in the community. He applied for the County Fire Academy in 2007 and graduated as class valedictorian. He rapidly gained his EMT-Intermediate license, and promoted to Lieutenant in 2010. He earned his Paramedic license in 2012, and also has certifications in Wildland Urban Interface operations and Swift water Rescue. BC Carroll earned his Bachelor's degree in Political Science from the University of Wisconsin-Madison in 1990.

Captain Mestas hired on with SFCFD in the fall of 2008 and assumed the duties of EMS Operations and Training serving under Chief Holland. He comes with over 20 years experience from Albuquerque Fire Department and is credentialed as EMS instructor in ACLS, PALS, BLS and PHTLS. He also serves as the Quality Assurance Officer (CQI) for the department. Since his involvement with county he has affiliated with SF Community College becoming an employee/instructor for the school. He has extensive involvement and training of several EMT Basic, EMT Intermediate, Paramedic classes, and EMT Instructor course for the county as well the annual EMT Combo Refresher classes.

Captain Jaffa joined the Department in 2008 and is responsible for Recruitment & Retention Programs and serves as the Department's Volunteer Coordinator. Mike has more than 28 years of experience in the fire service, having previously served as the Deputy Chief for both the Bernalillo County and the Village of Tijeras Fire Departments. He serves on numerous committees and task forces for the International Association of Fire Chiefs, where he currently is the chairperson for Company Officer Leadership Committee and the Reputation Management Project for the volunteer and Combination Officers Section.  He also serves as the NM State Director for the Firefighter Cancer Support Network, providing training and support to Firefighters dealing with a cancer diagnosis. Captain Jaffa is a frequent presenter at Fire Rescue International and other state and regional fire service conferences, covering such topics as: Firehouse Etiquette, Reputation Management, Cancer in the Fire Service, Fire Corps Programs, Volunteer & Career Integration, Jr. Firefighter Programs, Leadership Practices, and Recruiting and Retention of Volunteers.

Fire Marshal Blay began his fire career as a volunteer firefighter with Santa Fe County in 2004.  In 2006, he joined Los Alamos County Fire Department as a Firefighter/EMT and participated in their Fire Prevention and Public Education program. In 2007, he joined the City of Santa Fe Fire Department where he earned his Paramedic, Fire Inspector, and Hazardous Materials Tech certifications. Jaome became the City of Santa Fe Fire Department Deputy Fire Marshal in 2013. Fire Marshal Blay was born in Barcelona, Spain and has lived in Santa Fe County since 1993. He has a B.A. in Liberal Arts from the College of Santa Fe, and an A.A.S. in Fire Protection Technology  and A.S. in Emergency Medical Services  from ENMU Roswell.  Mr. Blay holds ICC certifications in fire inspection and fire plans review, and he is ICC Fire Code Specialist and Fire Marshal certified.

Captain Feulner started with the County in 2006 as a member of the Edgewood Volunteer Fire District as a structural and wildland firefighter. Although he was not an EMT he assisted medical personnel on all medical calls. Captain Feulner served as the EVFD Assistant Chief from January 2011 until June 2012. In 2010, he was hired by the County as a Fire Prevention- Urban Interface Specialist. In 2012 he was hired as the Wildland Division Captain. Captain Feulner is a certified Engine boss, A faller, ICT 4, and teaches wildland classes and refreshers both for the County and outside agencies.

Captain Caputo Joined Santa Fe County in 2009 as a Firefighter and EMT. He transitioned through the levels of EMS licensure completing his Paramedic program in 2015 from the UNM/AFR Paramedic Program. Over the years he has served as a Paramedic in all four regions of Santa Fe County. Through his years of service, he started his early fire career volunteering in Sandoval County, is an Adjunct Instructor for the local EMS program, and has served a term as secretary for Santa Fe County Firefighters Association IAFF 4366. He currently resides as the head of the Health and Safety committee of the local IAFF 4366. In his spare time, he enjoys spending time being active with his three children.

Captain Lundquist has been with the Santa Fe County Fire Department since 2009. Before being promoted to the rank of Fire Training Captain in 2016, he served in the Northern Region in Santa Fe County. In addition to his years of service as a Firefighter and EMT – I, he brings certifications from the NM Fire Training Academy as a Fire Instructor I and II, Officer I and II, Pump Operator, Rope Rescue Technician, and Haz Mat Technician. 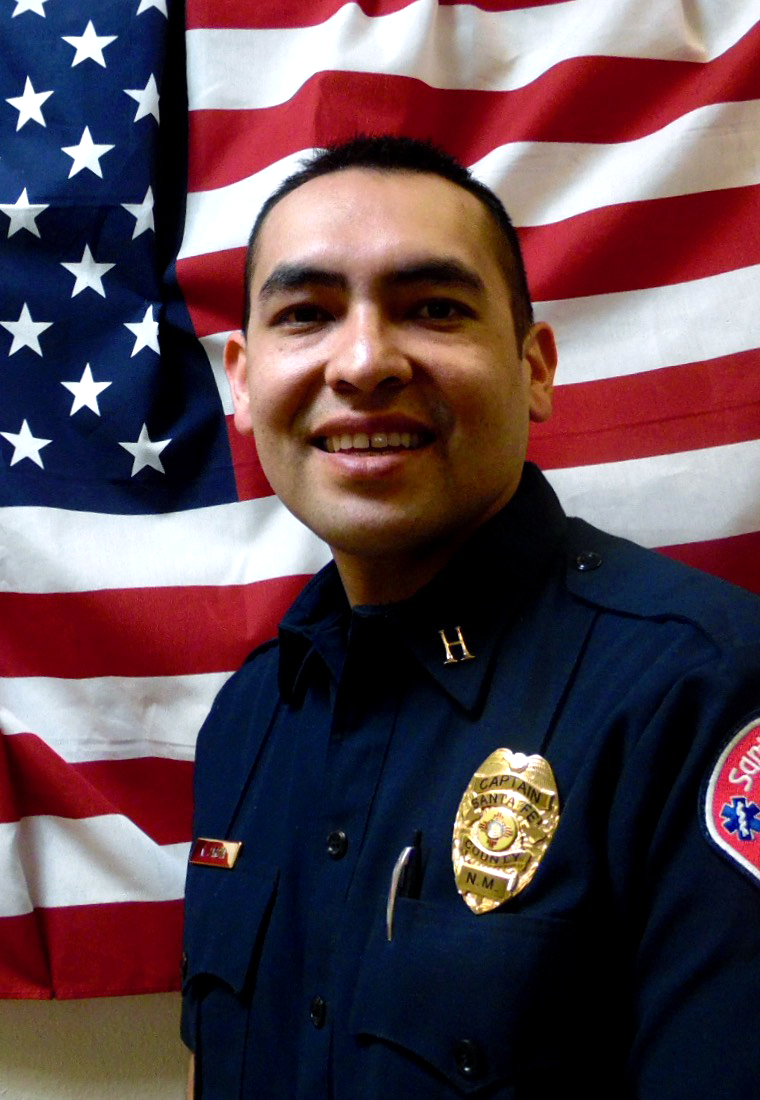 Captain Nestor Garcia joined Santa Fe Country in 2008 as a Wildland Interface Specialist. In 2010 he transitioned into the structural operations side as a Firefighter. He completed his paramedic program in 2015 from the UNM/AFR Paramedic Program. In 2017 he was promoted to the rank of Lieutenant where he served both the Western and Eastern Regions. He brings years of experience in Wildland, Structural Firefighting and EMS. In early 2020 he was promoted to Training Captain. Over the years he has provided service to all four regions of Santa Fe County in the capacity of Paramedic or Lieutenant and is excited to continue this service as a Training Captain. Along with serving Santa Fe Country, Captain Garcia has also worked or volunteered for Espanola Ambulance, the U.S. Forest Service, and the Village of Tijeras adding to his work experience. He has served as Vice President and Labor Management Coordinator for Santa Fe County Firefighters Association IAFF 4366 and Vice President for the East Mountain Interagency Fire Protection Association (EMIFPA). In his time off he enjoys spending time with his wife and two young daughters.

Get trusted alerts from your
local police & other agencies!